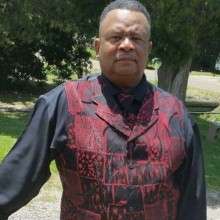 Frank graduated from Jeanerette High School in 1977. He married Sharon Granger in 1999 and they were together for 20 years. They lived together in San Antonio, TX. Frank worked Construction until he retired the year of 2010.

Frank was a big football fan and every Sunday, even though he stayed in San Antonio, he would sit in front of the television and cheer his New Orleans Saints on every Sunday.

Even though Frank is now no longer with us physically, he will always be with us spriritually.