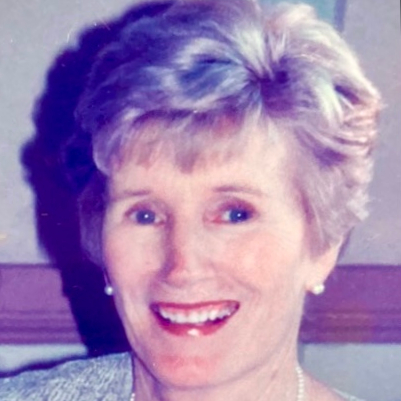 Frances Christina (née O’Sullivan) O’Brien, dedicated wife, mother, sister, grandmother, and fiercely proud Irish-American, passed away on January 12, 2022. She was 88 years old. The daughter of Frances (née Sheehan) and Daniel O’Sullivan, she grew up with eleven siblings on Teernahilan, on the Beara Peninsula, along Ireland’s Wild Atlantic Way in West Cork.

As a teenager, Frances passed the Irish Civil Service Exam and began working at The General Post on O’Connell Street in Dublin. It was in that city that she met and fell in love with a tall, charismatic medical student named Patrick O’Brien. The day after marrying on December 28, 1961, Frances and Pat boarded an ocean liner headed to America where Pat would continue his medical training. They went on to have four children and lived in many places all over the U.S., eventually settling in Fresno, California in 1971, where they would remain for the rest of their lives.

Frances devoted her life to her family, spending much of her time with her children and supporting their endeavors at St. Anthony School and San Joaquin Memorial High School. She enjoyed playing tennis and golf in addition to her involvement in the Candlelight Guild. She and Pat made many cherished friendships in Fresno, and they enjoyed countless adventures together. Frances loved history, poetry, and politics – never missing a 4pm airing of Chris Matthews’ Hardball.

While quiet and graceful – made starkly evident in comparison to her husband – Frances embodied strength and resilience. She absolutely loved spending time with her grandchildren and took great pride in their activities and accomplishments.

Throughout her life, Frances stayed very close to Ireland and her family there. During summers she would take her children to Castletownbere for extended trips, ensuring that they knew and appreciated her family and her country. Eventually she and Pat bought a home lovingly named Cois Cuan, “by the bay” in Gaelic, in Glengarriff, County Cork, where they would happily spend a few months every year.

During the last few years of Frances’ life, her eldest daughter, Mary Frances, and Mary’s partner, Larry Ivie, lovingly cared for her. Their devotion and commitment went above and beyond, particularly as the family navigated incredibly challenging times, including Pat’s passing and the illness and untimely loss of their son, David, from brain cancer.

Frances was predeceased by her husband, Pat, and her son, David. She is survived by her children, Mary Frances (Larry), William (Jill), and Elizabeth (Steven), her daughter-in-law, Julie Bachman, her grandchildren, and her many relatives in Ireland, England and the U.S.

Please join us for a funeral mass to celebrate the life of Frances on Friday, February 11, 2022 at 2:00 pm in the Guadalupe Chapel in St. Anthony of Padua Church, 5770 N. Maroa Ave, Fresno.