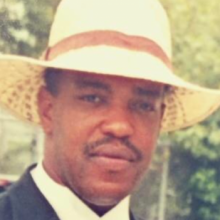 David volunteered at the Sharing and Caring Hands in 2011 and was passionate about affecting the most positive change in people.