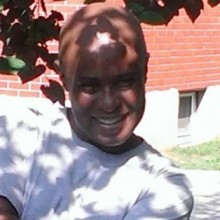 A native of Louisville, Kentucky, Darnell was preceded in death by his parents, Issac and Mary Lou Johnson; along with his brothers, Tyrone Carter, Dasmend Johnson; and sister, Kimberly Diaz.

Darnell was a wonderful man, husband, father, and friend to many. A lover of music, good food, and good company. Known for his cheerful ways and corny jokes. He loved to make people laugh, and had a smile that could light up the room. Early in life, Darnell was a member of The Highland Baptist Church in Louisville, KY where his parents were founding members. He graduated from Central High School in 1970, and went on to Western Kentucky University with a focus in social work. With a career in video production, Darnell had a knack for supporting others around him. Working over 20 years in video-music production, Darnell was accredited with having produced music videos from hit artists such as Mobb Deep, Black Street and Toni Braxton.

Darnell leaves behind his wife, Marti Johnson; his sons, Jerry Johnson of El Paso, Texas and Daniel Johnson of El Paso, Texas (both of a previous marriage with Ronda of San Diego, California); his son, Justin Johnson and daughter, Jalissa Johnson of Houston, Texas; step-daughter, Vanity Luna of Atlanta, Georgia. Also left behind are his 10 grandchildren: Destiny, Selena, Nathalia, Bella, Amri, Leah , Joshua, Luis, April and Earlina; along with a host of cousins, nephews, nieces, and friends.

Visitation for family and friends will take place , October 18th, 11:00 AM - 12:30 PM at Mason Funeral home in Highlands District , Louisville, Kentucky. Cards, flowers and such can be made out to Marti Johnson and Family and sent to 1642 Neblett Avenue, Shively, KY 40216.