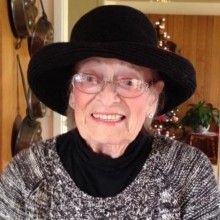 Constance Yvonne Kever 92, of Salinas passed away peacefully at her home Wednesday, July 8, 2015, with her family by her side. Yvonne was a Salinas native, born June 11, 1923 in Salinas, CA.

Her father, Peter McIntosh, was a Scotsman from New Zealand. He came to Salinas in 1919 and opened a barber and beauty shop on Main Street called "Mac's." It's been told that he gave the first permanent wave in Salinas. Her mother, Constance Bordges, was Salinas born, the daughter of Anton Bordges and Annie Phillips Bordges from the Azores Islands, Portugal. They were early pioneer farmers in Salinas' Blanco region and it's been told that they were one of the first families to grow lettuce in the Salinas Valley.

Yvonne attended the one-room Graves School House (off the Castroville Hwy). During her 5th grade year, Yvonne began attendance at the California School for the Deaf in Berkeley. At Berkeley, she was on the swim team and performed in dance recitals. In 1944, During WW2, she was a member of the USO's "Dancing Draftees," along with her friends Jean Goglia and Jennie Frassetto. Yvonne enjoyed ocean swims at Lovers Point, in Pacific Grove, with her friend and Berkeley alumni Gloria Razey.

In 1950, Yvonne married J. Warren (JW) Kever, an agronomist, who came to the Salinas Valley in 1949 from Texas. They were married 58 years, until he passed away in October 2008 at age 85.
In addition to being a wonderful Mother and Grandmother, Yvonne was involved with various deaf organizations including serving as board member and fundraiser for the Valley Advocacy & Communication Center for the Deaf and Hard of Hearing. In May 1986, she was awarded Deaf Women of the Year by the Quota Club of Carmel.

The family is thankful and grateful to Mom's caregivers who provided exceptional care during the past three years.