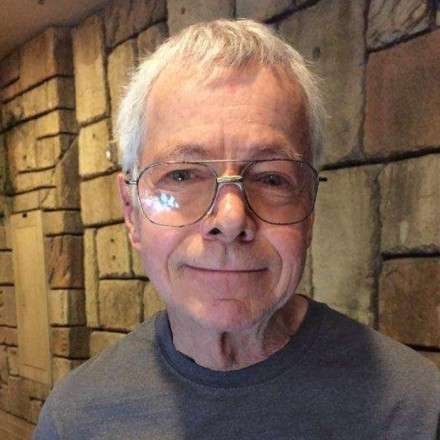 Hello WE love you Claude William Moore! Claude, who was also known as Bill or Billy, was born on November 24th, 1948 in Fruita to Claude and Ruth Moore of Fruita, Colorado. He died on April 9th, 2020 in San Bernardino, CA, he was 71. He loved living in Western Colorado, and fishing at Vega Dam.

He graduated from Fruita High School and later attended Mesa State College and earned an Associate degree in Science.   He worked for COOP in Fruita as a Grain Mill Operator before moving to Greeley, Colorado where he went to work as an Operator at a Grain Mill in Ault, CO.

He kept "his eyes on the road, hands up on the wheel" for about 10 years and took many a MOONLIGHT DRIVE while driving long rig trucks until he just couldn't take the cross country trips anymore and decided to settle down in LA where he purchased his own delivery van and began driving and delivering packages for FEDX in Riverside County.

He had a quirky sense of humor, and would make us all laugh, and then would turn around and pose questions that would make us all scratch our heads. Was he eccentric? Maybe he was, but that's what made him so interesting. He was brilliant!

STRANGE DAYS have found us! We were shocked to learn that he had passed away in April of a heart attack, we were just starting to get to know our brother once again; he will be sorely missed in so many ways. In particular, the thought provoking conversations that he stirred up and his cute smile and funny laugh will be embeded in our brains.

His father Claude Erwin Moore passed away in 1985 in Fruita and his mother, Ruth Hazel Moore passed away in Fruita in 1991. His brother Paul Moore of Westminster, Colorado passed away 2 weeks after Claude did on the 26th of April 2020. He is survived by his sister Diana Moore of Grand Junction, Colorado; his sister Linda Shaffer (Roger) of Ft Myers, Florida, his sister Juli Cogdill (Earl) of Grand Junction, Colorado, his brother Steve Moore (Janet) of Greeley, Colorado, and his brother Dennis Moore Bennett (Johnny)of Palm Springs, California.

Claude has 2 grand nieces; Eliana and Sophia Day of Atlanta and 3 grand nephews, Luke Daniel of Belfair, WA, Mason Rizzo of Louisville, KY, and Julius Henrikson of Eugene, OR. You will be greatly missed by all Claude, Break on Through to the Other Side! This is not THE END, but a new beginning.

A family celebration honoring Claude and our brother Paul has been postponed to the Fall, when it is safe to travel. Until then "fly free and happy and across forever and when we'll meet now and then, when we wish, in the one celebration that never will end."