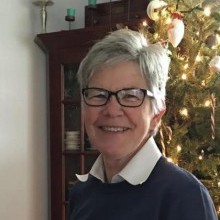 DELAWARE — Catherine Bannon Falter, 63, accomplished career woman, natty dresser, world traveler, self-taught wood worker and mosaic art creator, died on Tuesday, Nov. 29, 2016 from complications of metastatic breast cancer, much to her dismay, as she was not yet done.

Cathy was relatable and lovable by all who knew her after her retirement from AbbVie in April 2013. While still lovable prior to retirement, she was also a force to be reckoned with during her 31-year career with Ross Labs/Abbott Labs/AbbVie. Cathy was notorious for putting together extensive family trips that required no experience — until we arrived. I.E. hiking, mountain climbing, camping, horseback riding in the ocean, and exploring lava fields and volcanoes. Neither extensive family, or numerous friends were safe from her game nights, garden planting, or yard parties.

Cathy was born on Oct. 14, 1953 in Detroit, Mich. to Patricia Ann and Richard Paul Bannon (both deceased). She graduated from Bowling Green University in 1975, with a degree in Accounting, because it was the first one in the book and Actuary was going to be too hard. Her accounting degree was her launching pad to a myriad of other progressive positions, ending her career as Chief Ethics and Compliance Officer with AbbVie. During these years she also became a wife and loving mother to John Anthony (deceased), and Geoffrey William Falter. Retirement brought the joy of appreciating time with her family: wife, Peggy Morrow; son, Geoff and wife Kathleen; grandchildren, Mitchell and Megan Fanok and Maiya Falter; stepdaughter, Erin and husband Eric Hall; grandson Jack Tucker.

She will be dearly missed by her siblings, Barbara Decker (Mike), Debbie Carter (Bruce), Rich Bannon, and John Bannon; as well as nieces and nephews, Jenny Moyer (Mike), Elizabeth Falter, Kimberly Falter (deceased), Patrick Decker (Megan), Colleen Decker (fiancé, Tim Miles); extended family and a plethora of friends across the world. She leaves behind a garage full of unfinished projects, two yappy dogs, a hard act to follow, an inspiration to live life to the fullest, and a hole in many hearts.

In lieu of flowers, Cathy and family request donations to be made to Share, a nonprofit organization providing opportunity and means for the sharing of resources for those in need. www.shareyourbest.org, 177 N. Union St., Delaware, OH 43015.

A gathering of family and friends will be Monday from 5-8 p.m. at the Robinson Funeral Home. A celebration of life service will follow at a time to be announced in January.

Condolences may be expressed to the family and memories shared online at www.RobinsonFuneralHomeInc.com.