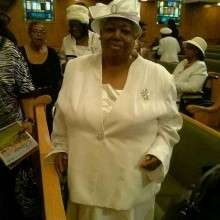 Carolee Parram was born in Omaha, Nebraska on September 29, 1942, the only child to parents Rosa Lee Carter and Cornelius Glover Sr she had two step-siblings that proceeds her in death, Cornelius Glover Jr. And Celestine Glover. They were members of Salem Baptist Church under the leadership of Rev. j.c. Wade. In 1960 she moved to Tennessee but later returned to Nebraska in 1963 with Bobby Parram and Kenneth Harold Parram she decided to relocate to Los Angeles, California in 1964 where she united with  Willie S. Rodgers and in a union conceived Sterlen Lee Rodgers in 1966. She became united with Isaac Johnson in the late 1960's until 1971. They were members of New Kingdom Baptist Church.

As we moved on to Menlo avenue we became students of Mt. Zion Vacation Bible school under the leadership of the late Velma Overstreet. In 1973 her parents joined her in California as we mid-morning 37th place. As she continued life as a single parent in 1976, she explored many jobs as a CNA for different convalescent homes and later she became a registered nurse. She began working at Centinela Hospital in Inglewood, ca until 1996 where she retired. She was very active in her children and grandchildren's life such as boy scouts, Cub scouts, girl scouts, brownies, cheerleading, flags, and sports. She was also a member of PTA and WCTU.

We became members of Mt. Zion Missionary Baptist Church in 1976 under the leadership of the late Pastor E.V. Hill, Sr. Where she became very active. She was a Sunday school teacher, vacation Bible school teacher, witnessing ministry, Lord's kitchen and LTL/YTC summer camp as a nurse assistant with the Wilson family, choir member etc.