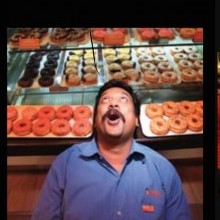 Ahknaad Francis Bahud was born in the crowded suburbs of Plano, Texas in November 11, 1967. He lived in an average sized house in the Deerfield north neighborhood, not too far from his beloved donut shop, Bahud’s. He grew up with his mom, dad, and his two sisters while attending Prince of Peace Catholic School. At a very young age his parents noticed Bahud’s passion early on, he would take chunks of dough and bake it then put on his infamous chocolate icing on it. Impressed by their little donut making prodigy, his parents decided to set aside a small amount of money each week to go towards a place where Bahud can set up his donut shop.

Another passion of his that almost got in the way of his donut filled destiny was his talent at cricket. At POP he played varsity as a freshman, sophomore, junior, and so on until his graduation in 1980. After being selected as first team all-state, for him his destiny seemed as clear as day. He would be a professional cricket player. All throughout his career at Prosper High school, he racked up some historical numbers, such as the first Indian to score 15 points in a single game. With his success during his high school years, he was able to play for the Lumberjacks of Stephen F Austin college in Austin, Texas. Unfortunately, during his first career game at SFA, he tore both of his ACLs and was forced retire from is one true passion. Or so he thought.

While hobbling ,through the school hallways, he saw an add for the bakery club. In honor of the past success at baking donuts he decided to give it a shot. When he first stepped into the kitchen he knew that this is where he wanted to be for the rest of his life. For his first project ever, he baked the perfect dozen of donuts the class had ever seen. When talked to his mom on the phone, he shared his revived success as a baker. Excitedly his mother told him that they saved up enough money for him to buy his own donut shop back at home in Plano, Texas. In excitement Bahud decided to drop out of SFA and move on to what he loved most. Making donuts. Instantly he started having success at his new hot spot of a donut shop. He would get up at four every day to bake his donuts for the day and he left work at ten thirty at night. It was hard and draining work but he loved it. It was the perfect thing for him to keep him happy.

After about twenty or so years working in the shop, he acquired some mad bank and became one of the most successful bakers of all time. While Bahud thought his parents were still paying the rent for the store, he realized they weren’t paying for it anymore until he was a few thousand dollars in debt. He received a threat letter from the IRS stating that he has two days to acquire the money and pay them or he would be thrown in jail. In time of peril for Bahud, he made a plan to use tax fraud and that worked for awhile. He failed to cover his tracks and he was eventually caught, the mighty Ahknaad Bahud had been caught and was being hunted down.

The manhunt was on, in the prediction of where Bahud might go, the FBI flew all the way to his house in Plano to await him. While being cerebral and not moving, he was safe in his beloved shop. To disguise himself he wore a Barack Obama mask so people wouldn’t recognize who he was and turn him in. After a failed search, the FBI gave up and decided to fly to Plano to go get some donuts at the popular and well known donut shop, Bahud’s. While there, Bahud recognized the agents right away. While acting suspicious, he sneezed and his Barack Obama mask flew right off and the agents saw the exposed face of Bahud. Bahud instantly drew his gun and shot two of the officers before getting gunned down by an Uzi carried by one of the surviving officers. Bahud and his store is still being run today by his family but without his experience donut making, they lost a little bit of popularity.

Bahud is a legend to everyone in Plano and everyone loves him for who he is. A kind old man who loved playing cricket and making donuts. From loyal store owners Connor Naughton, Nico Boyd, Andrew Sherman, Baron Aldrine, and Blake Bachonski, described him as, a “living legend,” and “the Indian donut making fiend.” For Bahud, making donuts didn’t change his world, but for all of his customers, the world changed for them.